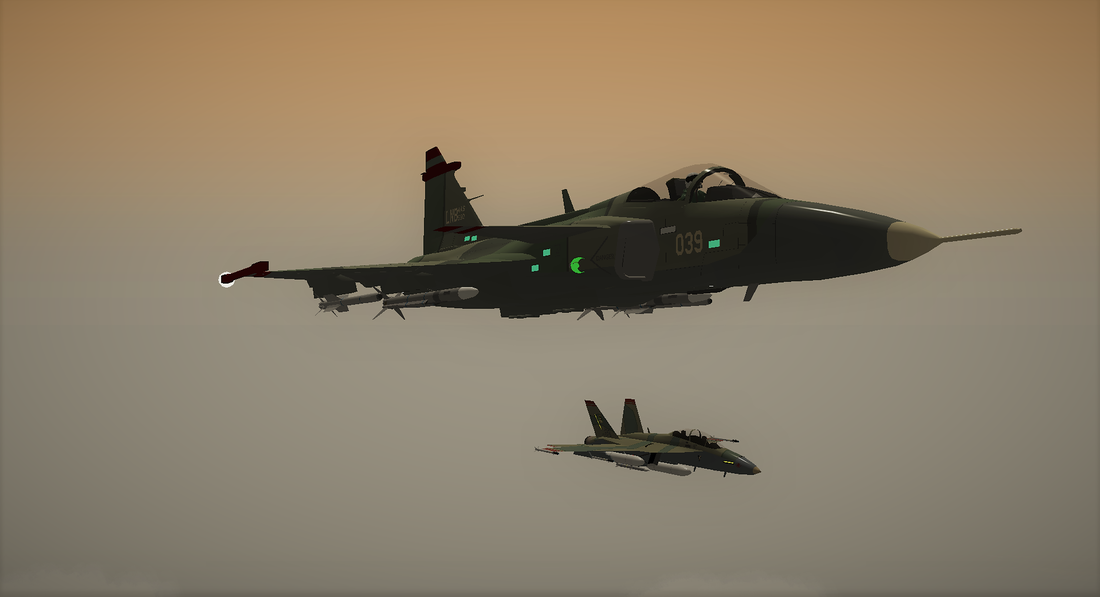 Our history begins in year 2016 when the GrunSolutions PMC ( formerly YS 8th Tactical Fighter Squadron "Grun" ) decided to make an umbrella squadron for the group to accomodate their personells from Southeast Asia beacuse of the different time zones between those who live in the western part of the world and the eastern ones. The squadron was named the 4th Aerial Squadron "Scorpions" or 4AS "Scorpions", led by Abel Flyer ( or now known as The Second Maverick ), 4AS "Scorpions" determined to attract more personells from Southeast Asia and keep its competency within the GrunSolutions PMC. On late 2016, GrunSolutions PMC was dissolved due to some issues, leaving the 4AS "Scorpions" to join a new fictional squadron / air wing alliance which is the YS Neo-United Nations or YS NUN which was made by the YS Special Armed Response Force or SARF. After a while, the 4AS "Scorpions" was enlarged into a bigger form, which is an air wing to accomodate more aircraft types and personells. Now named the 4th Aerial Wing "Scorpions" or 4AW "Scorpions", we strive to become YSFlight's best air wing with best personnell and fleet. 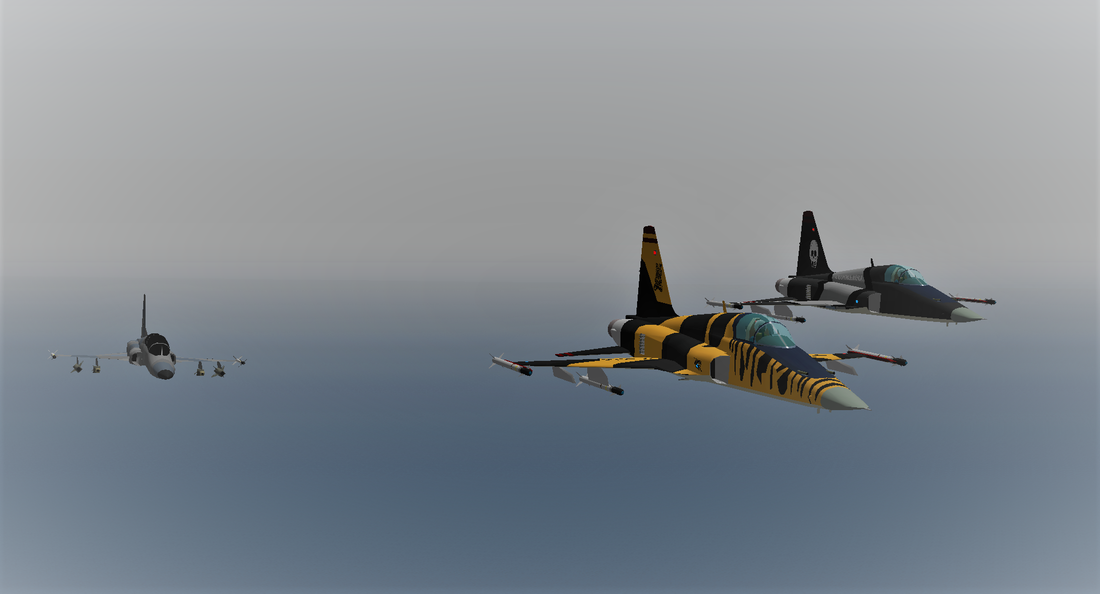 Come and fly together with us, your friends, and / or other pilots in our newly-opened public YSFlight server! Before joining our server, make sure you read carefully and follow our server's rules which are mentioned below! You can read the tutorial to join our server here.

About Our Server :
The Neo United Nations ( NUN ) Server is the primary server used by the NUN and YSFlight Indonesia. It is open to any pilots who wish to fly on the server, so long as they follow the rules. The server is currently in beta, so full features such as a full aircraft package and in-game activities are not yet completed. This server seeks to redefine the online YSFlight experience with a vibrant, positive community, activities, a good selection of add-ons and entertaining scenery.

The Neo United Nations Server would not be possible without server host Arie "Fiona" Wiranto, Dr. Simon O. Cohen ( Fikrikawakibi ), Dragon "Daishi" Mech, The Second Maverick, and M88youngling for their donations and contributions to the server.

Server Rules :
1. Beware the Dragon.
2. Bullying and harassment are strictly prohibited.
3. Do not attack players that are landed on the ground or are in the process of landing. This is called vulching and is only allowed if specified for an event. (Ex. city domination matches)
4. Do not attack civilian aircraft unless they declare themselves hostile.
5. If you do not wish to be attacked, the universal signal to disengage is by dropping three flares in a quick interval. You may also request over the server chat to not be attacked. Pilots are expected to respect these requests unless it is during an event or organized fight where it does not apply
6. If you are not part of an event, do not disrupt it by attacking participants or flying through the airspace of the event. (Ex. flying through an airshow location unregistered)
7. Some locations on the primary map for the server have airspaces enforced by Neo United Nations - Independent Mercenary Forces ( NUN-IMF ) squadrons. If you attack these locations, NUN-IMF aircraft may retaliate. It isn't against the rules to attack any ground targets, but be aware that NUN pilots might defend certain airspaces.

Note(s) :
To see informations of the server like whether it is currently online or offline, the map that is currently being used, number of pilots and their usernames, etc. , you can go here.
download the necessary packages to fly in our server here!

OUR ALLIES AND PARTNERS 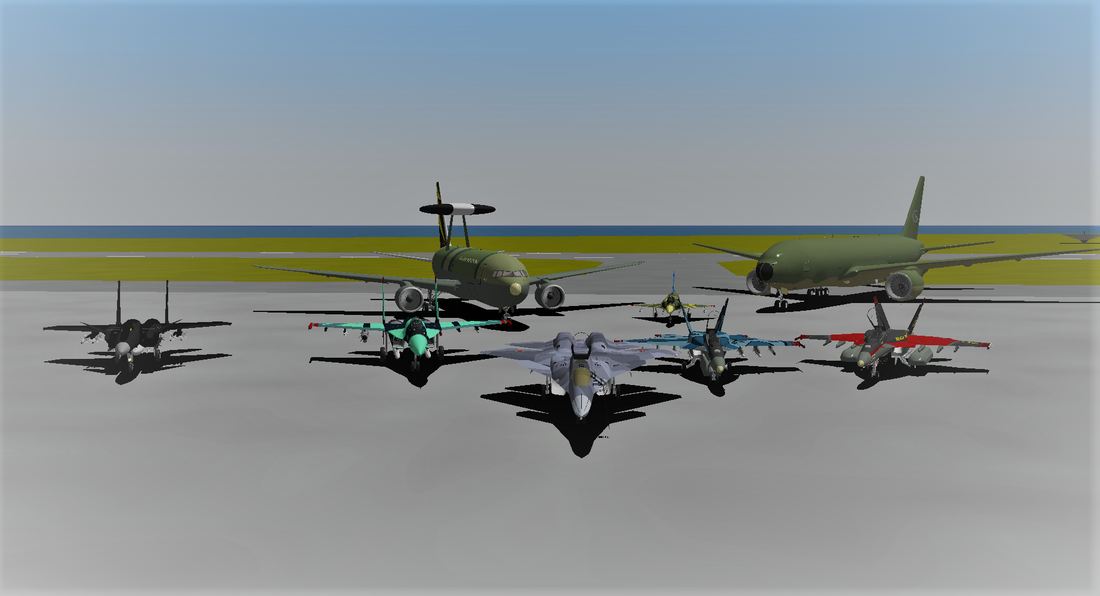 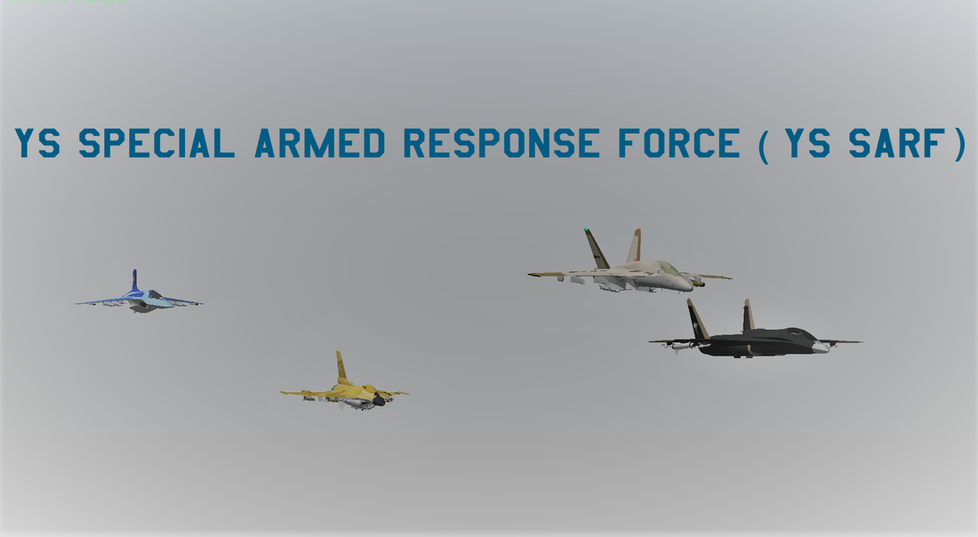 The YS Special Armed Response Force ( YS SARF ) is a squadron which operates advanced aircrafts which are mostly based from Ace Combat 3: Electrosphere game. The squadron is based on the Megafloat Island and is divided into 4 divisions, General Resource Ltd., Neucom Inc., Universal Peace Enforcement Organization ( UPEO ), and Ouroborus which got their own distinctive aircrafts. You can visit their website here. 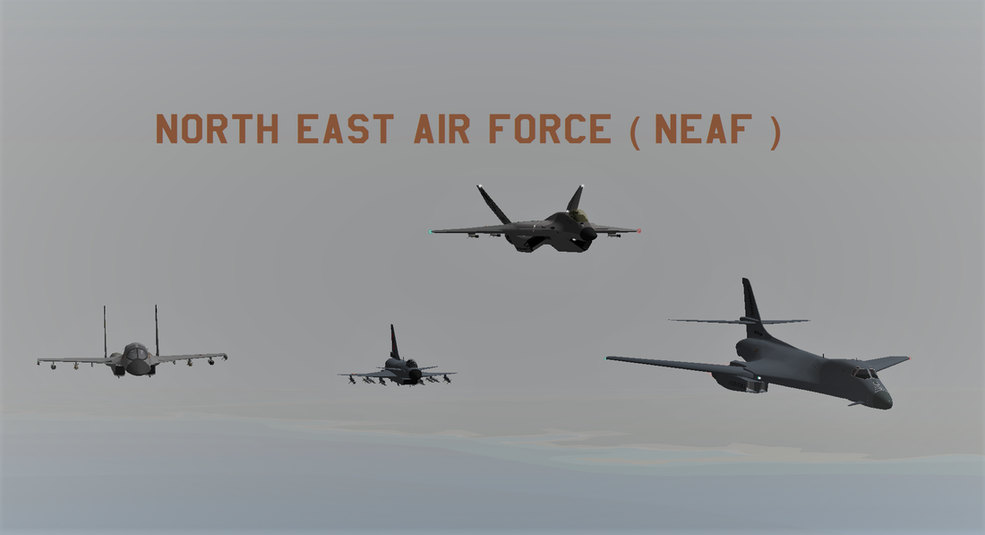 The North East Air Force ( NEAF ) is a small air force which primarily focuses on developing aircrafts. The air force is made up of 8 squadrons, which are the 504th Squids Squadron, 600th Lightning Squadron, 722th Suits Squadron, 744th Tiger Squadron, 766th Arachne Squadron, 804th Cleopatra Squadron, 900th Sharks Squadron, and the 988th Dragonfly Squadron. Their website can be found here. 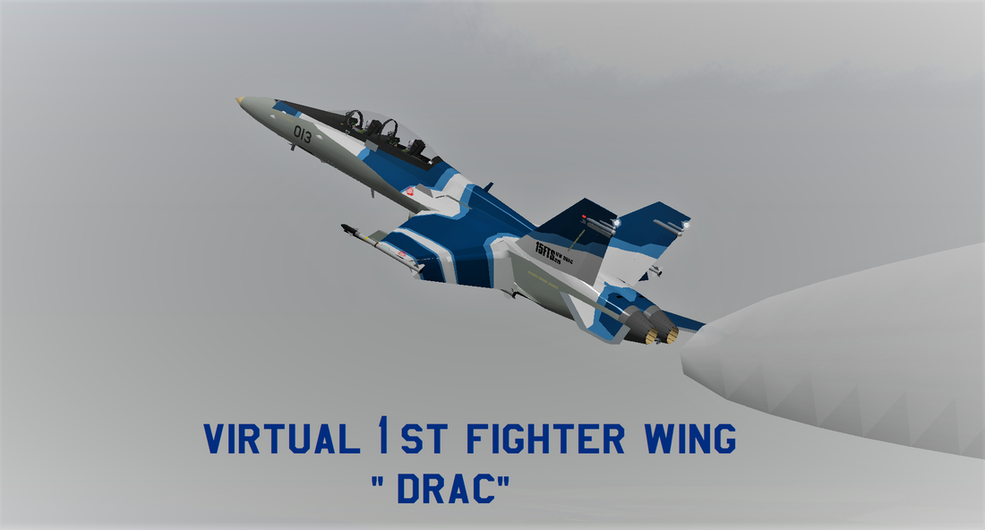 The Virtual 1st Fighter Wing "Drac" is the smallest air wing in NUN. They are an American virtual air wing who operate on fleet of mostly western aircrafts, it is made up of mostly veteran pilots from a few different squadrons such as : YS 66th Air Force Unit "Galm", GrunSolutions PMC, SARF, and 4AW. They have a strange origin for the Squadrons name sake they all come from the game series Castlevania. They are composed of the 11th Fighter Squadron "Aria", 12th Bomber Squadron "Castle", 13th Ground Squadron "Dracula", 14th Reconnaissance and Electronic Combat Squadron, and the 15th Flying Training Squadron. They have a website that you can visit here. They do also have a discord you can join here. 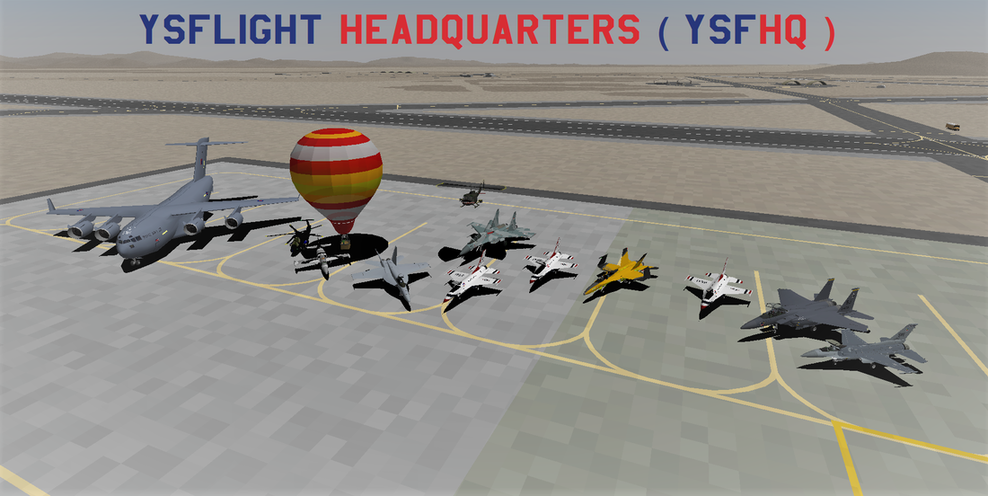 The YSFlight HeadQuarters ( YSFHQ ) is the best and the biggest English-speaking YSFlight fan community since 2010. On YSFHQ's forums, you can find add-ons, servers, and information for YSFlight, as well as a tight but large fan community. Visit the YSFHQ now! 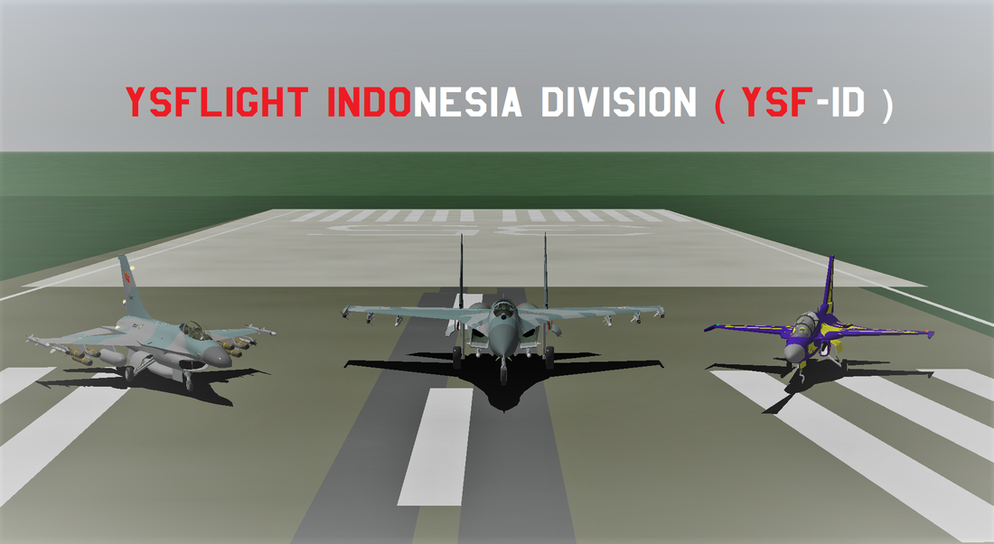 The YSFlight Indonesia Division ( YSF-ID ) is the only Indonesian Language-based YSFlight Community. Formed in around 2010s, the community had grown up quickly and expanding their forums from Facebook up until WhatsApp and Discord. You can visit their website here.
Credits goes to YS SARF's website for some of the templates, paragraphs, and images :p .